The latest Broadway Blitz* was a lovely, lovely weekend of theater with not a dud in the bunch! And I’m already plotting as to how I can get up there again, preferably before I the Tony Awards, I’m a little low on the play quotient this year; I’ve only seen one of the Tony nominated plays! But that’s for another post. 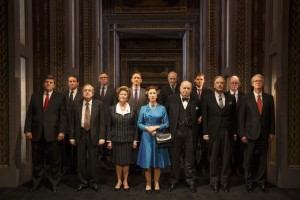 We kicked off our weekend of show-tasticness with something that really could not be missed, Dame Helen Mirren as QEII(Queen Elizabeth the 2nd, not to be confused with the ship) in The Audience. This really was a simple decision, I’d heard great things about this show when it played in London and was very excited when they announced it was coming to Broadway. Dame Mirren is one of those actors that you just go see; although, not to brag, it was not the first time I got to see her on stage. Several years ago she was in a quite wonderful in a production of Phèdre at the Shakespeare Theatre Company, right here in our modest little city on the Potomac. See… not at all braggy.

But back to the show; The Audience depicts 60 years of the Queen’s meetings with the different Prime Ministers that have served during her reign…but it is actually quite interesting and entertaining. It’s an interesting journey through a history I admit I’m a bit lax in knowing. I always love the shows that make me go back to my computer and google things. It is also a very interesting glimpse beyond the stoic royal faςade, that may or may not be accurate, but you leave the play hoping that it is. The play portrays the Queen not only as intelligent and thoughtful, even at a young age, but also as kind of wickedly funny. 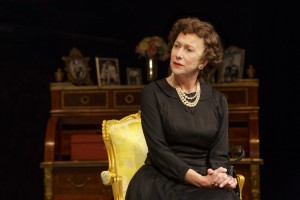 The play does not follow a strict chronology but bounces back and forth between the different decades of her reign; Dame Mirren’s (yep, going to keep calling her that) first transformation, from the Queen in her mid-60’s to her mid-20’s, which they manged to do almost seamlessly on stage, was rather awe inspiring. Yes, the costuming does help, but the subtle and not so subtle changes in the portrayal was quite exceptional. You start with the 65+ year old queen with 4 decades of rule under her belt and you regress to the 26 year old woman, not yet even crowned, dealing with the onset of a vast amount of responsibilities and having to wrangle with a Winston Churchill, who has distinct ideas of how things should be done. As you move forward and backward through the history her reign Dame Mirren continuously transforms herself, yet maintains a continuous thread of who Her Majesty is beneath the required royal protocol. Flashbacks to Elizabeth as a child lays what seems to be a pretty good argument that QEII has always found the Royal Life rather chaffing and restrictive and having been given her druthers she would have been quite content with a life in the Scottish highlands, having been able to take her husbands name as “normal” women were wont to do. 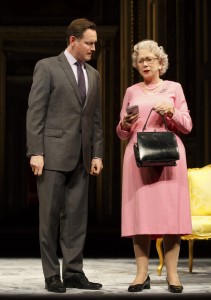 The Prime Ministers, and don’t worry you don’t go through all 12 of them, only seven of them, were a diverse and varied group of actors. Dylan Baker is nominated for his role as John Major, although I have to say that amongst all the other excellent actors he did not leap out as exceptionally better. Not that I’m disagreeing with nomination, just and observation, all the actors were quite good. I found it interesting that of all the Prime Ministers it seemed that Margaret Thatcher got the least sympathetic portrayal; and that’s even with Anthony Eden causing the whole Suez Canal Crisis (look it up, it’s and interesting early slice of the West meddling in the Middle East over oil.) Although my understanding is that the Queen actively disliked Mrs. Thatcher and since this is her story perhaps it is not in appropriate. 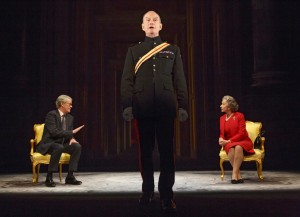 One interesting construct in the play is that Queens Equerry (Majordomo/Factotum) did not change at all throughout the play, obviously this position would have been filled by different people throughout the 60 years but he is our guide/narrator for the play and remains unchanged. Perhaps this is a nod to the consistency of the Queen’s reign, or perhaps even of the British Empire? Or I’m just reading too much into it. The coronation scene that ends the first act is one of the most moving scenes of the play, it brought a tear to my eye, and is a wonderful argument to give Dame Mirren the Best Actress Tony, besides the fact that she’s Dame Helen freaking-Mirren, and we should all just shut up and give her the award already!

All that aside, an excellent and entertaining evening of theater, would I give it the Best Original Play Tony? Probably not, I still think Disgraced is a much better play.

Coming up Next my review of the new musical, Fun Home. Don’t let the name fool you.

*Broadway Blitz = a weekend spent seeing as many shows as possible