Okay, I’ve seen this show three time now, once on Broadway with the original cast (it never gets better than that) and twice with the national tour and I just have to say, apparently this sh#t just does not get old! You would think it would, but it doesn’t. Having seen the show more than once you’re anticipating the funny parts you remember and the funny parts you don’t remember take you by surprise. It’s here in DC until August 16th at the Kennedy Center, if you’re in the mood to laugh. I’m not writing a new review, but my original post from 2011. 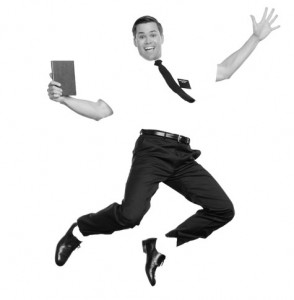 a little mulling over and chewing and writing and re-writing to try and figure out how to best describe this show. The show got a lot of buzz early on, just because of the people involved in this production and the topic they’ve chosen to feature. If you are not aware of this show it is the brain child of Trey Parker and Matt Stone, yes the South Park guys, the guys who showed up to the Oscars in dresses, the ones who keep killing Kenny, those guys. I will admit that South Park is not my typical cup of tea; I’m more of a chai girl. When I heard that they had been developing the show for over seven years and were collaborating with Broadway veteran Robert Lopez I was much reassured. Mr. Lopez is a Tony award winning writer for Avenue Q, a hilariously wrong, wrong spoof of the Sesame Street genre. The Book of Mormon was conceived when these three men met and hilarity is the result.

I have to give them a lot of credit, they have written a tight, clever and ridiculously funny show. If you want to see it any time soon I suggest you take a moment and get on line and get your tickets now. It’s selling out quickly and months in advance. Once it cleans up at the Tony Awards in a couple of weeks (as all trends seem to be indicating) tickets will only be harder and more expensive to get. 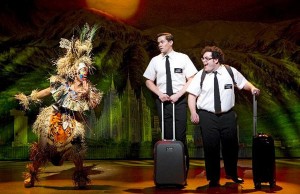 The show for all of its irreverence and eschewing of standard mores actually follows some classic musical formulas. The plot, at its core, is the classic buddy road movie combined with typical young man coming of age story. It’s somewhere between Bing and Hope in the “Road to Morocco”, “Stand By Me” and “Bill and Ted’s Excellent Adventure”. Okay, it tends to tilt towards Bill and Ted but that doesn’t make it any less funny. The show follows the adventures of two young Mormon missionaries Elder Price (Kevin) and Elder Cunningham (Arnold) that have been sent to convert the inhabitants of a small village in Uganda. As in most “buddy” stories the pair consists of the alpha personality (Kevin) who is seemingly strong, good and an ideal Mormon and his goofy misfit mission partner Arnold who has problems “misapplying” his imagination. 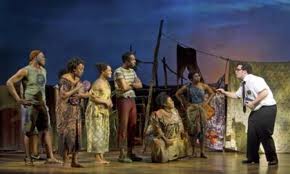 The show pushes and frequently hurdles, with feet to spare, the boundaries of propriety and good taste but usually I was laughing too hard to notice. The insidious thing about this show is that underneath all the humor and inappropriateness they’re exploring some basic ontological questions about the nature of faith and the role of organized religion in modern society. You could probably replace most freshman level theology courses with this show, and class enrolement would increase tenfold. Kevin learns that faith isn’t a quid pro quo situation, just because you’ve been a good Mormon all your life and prayed every day doesn’t mean that God is going to send you on Mission to the most beautiful place on Earth, Orlando. Nor will a devout belief in God’s word necessarily provide actual physical protection and will not in all likely hood stop General Buttfuckingnaked (that’s his formal title) from shoving your Holy book somewhere the Heavenly Father never intended it to reside. Fear of Hell is not sufficient motivation for doing good works. The show questions the nature of missionary work, it’s hard to be concerned about the nature of God when you’re too busy trying not to die from dysentery or AIDS. In one of the funniest parts of the show Arnold, in his zeal to convert people and an attempt to actually improve the villager’s lives, allow his “imagination” to run away with him and adds some interesting verses to the Book of Mormon.

There are a few times in the show where I did inhale sharply; you have to tread delicately when dealing with female circumcision, but they do come down firmly against it and stopping it is one of the main plot points. I could actually get behind a tenant that states “For a clitoris is Holy amongst all things,” that’s not a bad starting point for a religion.

Is the show offensive to Mormons? You’ll have to find one who’s seen it and ask them. It actually made me curious about the religion, apparently there’s more to it than the tabernacle and polygamy. An angel named Moroni, really? Aren’t angels supposed to have strong names like Gabriel and Michael? Ancient Jews sailed to upstate New York? You get your own planet? I’m going to have to look this up. Meanwhile, every time you laugh at the Mormon beliefs, the show is questioning the belief systems of every organized religion. Why are the Mormon beliefs any more ridiculous than water into wine or oil that burns for much longer than it should? Such is the nature of faith is it not, belief without understanding. 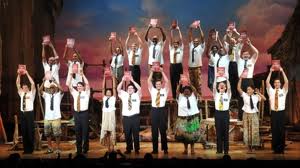 The songs throughout are laugh out loud funny and frankly not as profane or really even as sacrilegious as I expected. After all, half the characters are Mormon and it would not be in character for them to be cussing up a storm. This leaves the profanity to the African characters (which is only slightly more appropriate but somebody needed to do the cussing) and even then, there are only a couple of songs that are overtly profane. The song Hasa Dega Eebowai is the worst song as far as profanity and blasphemy goes, it is intentionally the opposite sentiment expressed in the song Hakuna Matata from the Lion King (which is mocked throughout the show) and expresses a less than exemplary opinion of God.  When the cast of whiter than white Mormon characters sing “I am Africa” I nearly peed my pants. The penultimate moment of the show is when the African villagers present to the head of the Mormon mission a play enacting the story of Joseph Smith, with Arnold’s embellishments; I’m certain that this is the first time someone has successfully incorporated the danger of dysentery into a Broadway musical.

I do have to give some love to the cast; they give their all to the material and really make the show work. The leads Josh Gad as Arnold and Andrew Rannels as Kevin and Nikki James as Nabulungi are all most deservedly Tony nominated but it truly is an ensemble effort. The entire cast is wonderful and I would love to post some videos of them performing but the producers of the show have been quite stingy with any videos of the production. Here are a few of the songs; I tried to keep them PG-13.