Every so often you get to see one of these types of shows, a show that tips over from entertainment to actual Art. Yes, yes, yes, I know all theater is art but this is serious, with a capital ‘A,’ Art! Everything about this show is so well conceived, constructed, so thoughtfully assembled, and has such depth of the performance that it created a most compelling work of Art. If someone told me they were just winging it would break my heart; the truth being that you don’t put something like this together without a great deal of thought and effort a forehand. Yaël Farber, who both wrote and directed the play, obviously had a vision of how she wanted to portray the legend of Salomé and she created a very compelling narrative and a visual feast for the eyes.

I will admit that I am only passingly familiar with the story of Salome, I knew it had something to do with biblical times, a beheading and dancing and veils, but I really enjoyed this telling of the story, it resonated with a feeling of mythic truthfulness as well as sociopolitical/theological currency. I say truthfulness acknowledging this is a fictional (or at least mythological?) tale but the tale told here feels like a story that would survive millennium and be retold by people who cannot conceive the reality of the time and place. Watching the show it’s evident that Ms. Farber borrowed from a variety of cultural/artistic sources in creating the rich tapestry of the show. I will admit I caught on to the visual ones more readily than the narrative ones. 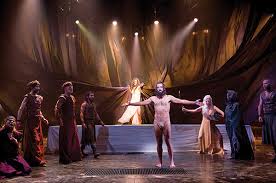 Everything in this production had a purpose that served to deepen the narrative, there was nothing extraneous. The Judean priests moved and spoke in a stylized manner that dripped heavy with the nature of their rituals, with hands permanently stained with the blood of the perpetual sacrifices at the alter. Iokonnan, the prophet (John the Baptist) from the wilderness, speaks only his own language (here a classical version of Arabic); his voice is the one that has not bent under the yoke of compromise, of corruption, his voice is the one that is different from all the others; the speaker of truth.

Salomé, for the majority of the production is voiceless. Her narrative is given to an old woman who is unnamed but could be alternately considered Salome as on old woman, as they seem to say Salome did not die; or (as I prefer) as the eternal spirit of Salomé who could not be killed but is ever nameless because those who had power, those who wrote the history, swore to strip her of her identity and swore that her life and actions would never be known and never have meaning. In that context they did fail to kill her, there is no reference by name in the bible to Herrod’s daughter, Salomé is an invention of centuries later, but her story is everlasting. In this story, Salomé is no wanton, rather the opposite, her actions have purpose and meaning. The death of Iokannan is less murder, more sacrifice, one in which he is complicit. This references back to the descriptions of the bloody sacrifices in the temples, but here sacrifice is in the name of change and not in the maintenance of the exiting order. Salomé by invoking the death of the prophet, whom everyone in power wanted to but feared to kill, is a catalyst, the tipping point from which there is no return. Beheading tend to be that way. 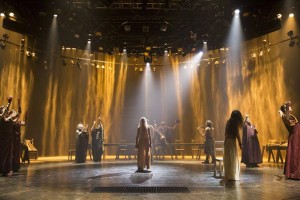 This performance is rich with threads that weave back and forth throughout connecting different parts of the tapestry of the story. Enriching that tapestry is the visual feast provided by the set deign and lighting. It is rare that I bother to flip through the playbill to see who did the lighting design but I am little surprised to see that Donald Holder has a couple Tony awards and many more than a couple nominations for lighting design. He created moments of chiaroscuro that would have made Caravagio jealous. I have spent a few moments on line trying to confirm the reference to famous pieces of are that seemed to be scattered through the production. The Last Supper was pretty obvious but there was a mad man who in me kept invoking Goya’s Saturn Devouring His Son, which seems appropriate to the nature of the story; not only in the destructive relationship of Harrod and Salomé but also in the way the Roman’s sought to civilize the natives and in the way the priests were more concerned with worship rather than tending to the people.

You have only through next weekend to see this show, and I really recommend it if at all possible and I sincerely hope that there are plans to perform the show elsewhere as well.