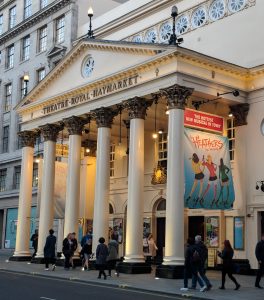 What an inauspicious start to my first visit to the West End. This will be a short and bitter screed;  these few things may be used to ameliorate my critique 1) my well know disdain for the movie to musical genre, 2) I was pretty tired when I saw it, but highly caffeinated, 3) this was a beloved and seminal movie of my teenage years.

In no particular order here’s what I didn’t like about the show:

I may very well be the cheese that stands alone on this one. The majority of the audience, which skewed heavily towards those who were not alive when the movie came out (or in the decade or two following) cheered each song like it was the score of Hamilton. Kids today…what are you going to do.