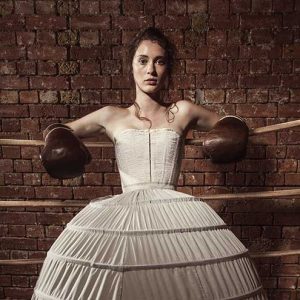 This production has already closed but it was intriguing enough that I still want write about it. The premise grabbed my attention immediately; Victorian era women’s boxing. I am perpetually on the lookout for the new and different and this seemed to fit the bill. It also had the added bonuses of being a world premiere and unlikely to cross the pond anytime soon.

Set in the latter part of the 19th century the play revolves around four women of different social classes: Violet, nurse with ambitions to be a doctor; Anna, upper middle class housewife; Matty, typesetter by day, prostitute by night; and Polly, lower class workaday who genuinely wants to be a boxer. The play explores how each of them are drawn into the underground world of women’s boxing and the inevitable intersection of their lives. It is both an interesting vignette of Victorian London and a good allegory of modern feminism (in a look how far we’ve come, but look how far we must still go).

For these women boxing is a means to an end; self-determination and fiscal freedom from the men who control their lives, be they boyfriends, husbands, employers and/or tricks. That their only means of achieving that freedom is by allowing themselves to be exploited for the titillation of these selfsame men is the irony that drives the narrative. It is further highlighted when Polly, the one woman who really wants to be a boxer, is the one who gives it up to be with the man she loves and to sooth and bolster his ego.

I enjoyed the play, it was entertaining and interesting and very well acted. The four female leads were very good and I especially enjoyed Fiona Skinner as Polly, there was an effortless genuineness to her performance that made me really like the character.

The material itself could use some refining. Mostly in the story of Anna, the housewife with the philandering and abusive husband. I rather wish that her husband’s abuse wasn’t what drove her to boxing, or that he was even physically abusive. Perhaps the bloodlessness of her existence motivates her to seek out the adrenaline rush of boxing. Of the four women she has and loses the most. I rather wish, SPOILER ALERT…

…I rather wish, instead of Anna being executed for beating her husband to death she was incarcerated in the sanitarium as her husband threatened. I think it would have been a stronger condemnation of society’s hypocrisy and how little power she had in the world. For doing that which her husband himself enjoyed watching, she is considered deviant and can be  summarily punished. As long as I’m wishing for things, I also wish that the physical altercation with her husband had taken place on stage. I was anticipating that moment, the build-up to it was palpable, and I feel a little robbed by having the cathartic moment of confrontation happen off stage.

The weakness of this production was the boxing. This may be a picky criticism but when the premise is women can do anything men can do, don’t give me bad fake boxing. Certainly the show isn’t actually about women boxing but boxing did comprise a significant number of the scenes and the poor choreography and execution took you out of the moment and disrupted the flow of the play. It could be why I enjoyed Ms. Skinner’s performance the most, of all the actresses she seemed to have the best handle on how to (fake) box. Her altercation with her husband/sparing partner was the most realistic in the show. It’s the only time the audience gasped.