If you have time and flexibility in your schedule there are some fantastic deals that can be had for tickets. Most theaters provide some kind of discounted tickets based on availability. Typically these options only apply to same day ticket sales and are generally limited in quantity and will require spending some time standing in a line and there’s no guarantee that you will get a ticket. That being said if you really want to see a show but don’t want to fork over the $$$ these are you primary options.

I believe it was the producers of Rent, in 1996, that first instituted the student rush ticket policy. They set aside the first two rows in the theater and sold them on a first come basis the day of the performance for $20. I guess the irony of putting on a show about impoverished artists that impoverished artists couldn’t afford was too much for them.

There are typically two  types of rush tickets, student and general. General tickets are open to the general public and student tickets require a valid student ID. The tickets go on sale as soon as the box office opens but the lines can start up to two hours before the box office opens. Typically you’re going to be limited to one or two tickets per person and will probably have to pay cash. Ticket costs will vary from production to production but range from $25-40.

Lottery tickets are slightly different than the rush tickets. These tickets are distributed 2 hours before the curtain time. To enter the lottery submit your name to the box office 2 1/2 hours before the curtain, at the 2 hour mark the names will be drawn to see who gets tickets, you must be present to win. Your limited to two tickets per person and again may have to pay in cash. Like the rush tickets it is likely that you will spend some time waiting in line.

SRO or Standing Room Only tickets are only going to be available if the show is actually sold out. These will be designated spaces behind the last row of the orchestra and yes, you have to stand. On the up side you’ll have a nice head start for the toilets at intermission.

Follow the link below to see the current ticket policies for the major shows. As always double check with the theater box office because policies may change without notice. 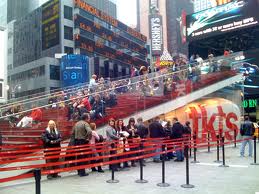 TKTS Booth A slightly more certain way of getting discount tickets is at the TKTS booth in Times Square, but don’t worry you still get to stand in a line for an indeterminate length of time. You can get tickets here for most Broadway and Off-Broadway shows for 25-50% off. Like rush/lottery tickets theses are all same day tickets. The ticket booth opens up at 10am for sale of matinee tickets and 3 pm for evening performances but the lines will typically start at least an hour before. Once the ticket office opens the line moves pretty quickly but you can expect a wait of at least an hour. A nice change that came with the new ticket pavilion that was opened in 2008 is that you can now use credit cards and are not restricted to cash only.

Some hints for using the TKTS booth include:

There are two other satellite locations where you can get tickets; there’s a both at the Southside Seaport and downtown Brooklyn. Hit the link below for additional info.

At the Booth – TKTS

If perchance you would like to get discount tickets without standing in a line with the sometimes washed masses there is another option; join the Playbill Club. It free to do and it will give you access to a fare number of pretty good discount tickets, rarely 50% but you can get orchestra seating for $70-90 dollars a good $50-60 dollars savings per ticket. Ticket handling charges apply just like regular priced ticket sales. There will be restrictions such as a range of dates or specific days of the week but you can buy these tickets in advance from your home computer and have time to plan your trip accordingly. The link below will take you to the current list of discount shows available, you can view them but you must join to be able to buy. I’ve signed up for email notifications that way I can jump on the good deals for shows I really want to see.

If you don’t see the show that you want on Playbill another good location to check is atBroadway Box. This takes you through the same Broadway Offers web site but it sometimes has shows that aren’t posted on Playbill.